Triple pack repress of one of the most important and defining techno records ever made. 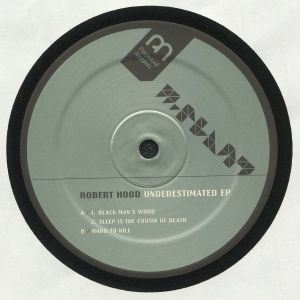 To open M-Plant’s 2021 schedule, Robert Hood announces the return of the Perpetual Masters series. The ‘Underestimated EP’ still sounds as fierce as it did when it was originally released in 1998, delivering Hood’s personal style of minimal, stripped back Techno with crisp beats, powerful build-ups and flawless grooves; nothing is superfluous. 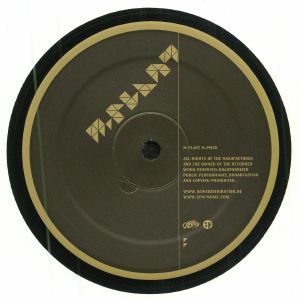 The original minimal techno master wastes no time with ‘Clocks’. There’s a sense of urgency as the track builds, looping into its crescendo with waves of staccato hi-hats. Tick tock, tick tock. Over on the flip side there’s a familiarity in the opening chords of ‘Low Life’ that will resonate with fans of Hood’s work. Instantly recognisable, it’s stamped with his ability to bring funk and groove to the colder stomp of techno. Final opus, ‘Go’ brings a spiralling samba tempo to the dancefloor. The punchy drumbeat is interwoven with sweeping cymbals for a highly effective infectiousness, like a call to arms, or better still, the Brazilian call to carnival.

The original version of Stunned was released on Mark Broom & Dave Hills renowned Pure Plastic label back in 1997. The 97 Mix featured here started as a live mix of the track, which Mark has now tweaked for maximum dancefloor devastation. Its accompanied on the flip side by a brand new composition of equally outstanding quality. Broom is in fine form on Decay with his tight production skills delivering the kind of tough, raw Techno that sits perfectly on M-Plant.

Thirty three seminal Robert Hood productions: The M-Plant Mother lode has landed. Even if you’re well up to date on the Detroit legend’s storied career there’s no stopping the joy at what material has been included here – including – the best minimal techno production of all time: Monobox’s “Realm”. For something funkier there’s the “The Pace”, “The Greatest Dancer”, the all praising “We Magnify His Name” and “Monkey”. But wait: there’s more! “Alpha” and “The Family” from his Omega Man LP makes the cut as do the epic James Brown and Aretha Franklin samples from newer school Floorplan material “Baby Baby” and “Never Grow Old”. There’s also the legendary stuff like “Who Taught You Math” and “Minus” to “Protein Valve” and much, much more.

If one variation of confused blips and synths gurgles underpinned by a rock solid 909 beat by Robert Hood isn’t enough than indulge yourself in two. For this first chapter of the Moveable Parts EP series, Hood’s work here will please those after some more Monobox action as both “Untitled 1” and “Untitled 4” are discombobulated versions of each other. If you’re after a mutant version of the latter for the packed dancefloor however, Hood’s got you covered with “Untitled Sketch”.

M Plant’s 20 Year anniversary celebrations are set to end on a high with a triple CD compilation featuring a wealth of new, remastered and unreleased material alongside some classics from the Robert Hood canon. Before then, the latest in an ongoing series of celebratory 12″ releases sees Hood look to the classic Protein Valve, which was the first 12″ issued on M Plant back in 1994. The title track has already been subject to some edits as part of this M Plant 20 series, but it’s nice to see three tracks from that original 12″ reissued here as a reminder how Hood’s pioneering minimal approach first took shape.

As part of M-Plant’s 20th Anniversary, it’s the perfect time for Robert Hood to re-visit one of his other decisive monikers, Monobox. The deep and melodious tones of ‘Film’ are beautifully offset by the tougher machine groove of ‘Rectangle’, with both tracks conveying the hypnotic minimalist approach of Hood’s otherworldly Monobox sound.

The Floorplan project show-cased Robert Hood’s love of gospel-tinged house, but as this, his latest release demonstrates, he remains a techno artist through and through. The Protein Valve record originally appeared on M Plant 20 years ago and like Hood’s Internal Empire and Minimal Nation releases, became a blueprint for minimal techno. On the “Re-Plant” and “Edit 1” versions, nagging, insistent percussion and an eerie organ sound create a sense of drama. However, the old approach proves to be the most effective and the second edit remains closer to the original sound, with jittery hats, unsettling organ riffs and the wind whooshing past in the background.

Continuing the 20th anniversary celebrations of Robert Hood’s M-Plant label which began with Mark Broom’s edits of ‘Untitled 1’ and ‘One Touch’ in March, Hood now delivers remixes of two of his Floorplan tracks taken from the 2013 Paradise album.

This year Robert Hood celebrates the 20th anniversary of his M-Plant label with a sequence of EPs featuring classic M-Plant releases and rarities remixed and re-edited, a compilation bringing Hood’s huge body of work together and a series of special events. Kicking off the EP releases, UK techno stalwart Mark Broom delivers these exceptional edits of ‘Untitled 1’ from Hood’s series ‘Moveable Parts’ and ‘One Touch’ from the ‘Minimal Nation’ album.

Following on from his Floorplan album and November’s Floorplan EP, Robert Hood returns with a new double header on M-Plant, to close 2013. He delivers these two new cuts of pulsating, body-moving Techno with that classic, deep and minimal Hood sound. He builds ‘Eleven’ and ‘Alarm’, layer upon layer, gradually drawing all the elements together, until they become a penetrating attack on the senses.

Paradise sees minimal Detroit techno icon Robert Hood exploring the Floorplan concept in more expansive style. The Floorplan project was founded in the mid 90s, as Hood looked to merge his minimalist approach with elements of house, disco, funk and gospel. Explored intermittently over a six year period, Hood put it to one side and it was a reissue of the Floorplan debut by Rush Hour that inspired him to revisit the project in 2011, scoring a bonafide gem in “We Magnify His Name”. Explored in album format here, Paradise is a mixture of all new material and tracks culled from these recent M Plant 12″ releases, lending the album a sense of continuity. It’s all the more impressive when you consider the fact Hood’s been releasing one highly conceptual album a year since 2009.

Now Robert Hood delves back into Floorplan for his next M-Plant release called ‘Altered Ego EP’. The title track jacks out from the onset, just the way we like it! Hood’s distinctive rhythmic grooves are intoxicating as ever. With the staccato vocal cut and Detroit-meets-Chicago feeling, we’re back in ‘Baby Baby’ territory. ‘Confess’ shows the other side to Hood’s Floorplan with an opening gospel style piano riff that’s gradually overlaid with Latin percussion and that special Hood kick, to take the church to the party.

The latest release in the ‘Perpetual Masters’ series, which sees the M-Plant catalogue being remastered and re-released, is the classic ‘The Greatest Dancer’.

Robert Hood, the Detroit legend and true originator of minimal techno returns to revisit the Omega project he first began last year. It was inspired by the 1971 sci-fi thriller “The Omega Man”, which may be unfamiliar, but is based on the 1954 novel “I Am Legend.” The original album was released last year, however, this time around, he has given it a makeover in order to suit a live show he will be touring around this upcoming summer. On ‘Omega: Alive’ Hood takes the raw elements of the originals and builds them into a tense and pulsating live show that propels ‘Omega’ into a new light. Opening with new track ‘Bells At Dusk’ Hood builds over a sparse drum pattern before a scatter shot piano riff announces the unmistakable kick sound of the minimal master. ‘Run’ keeps up with soft pads and then Hood drops one of the albums key tracks with the staccato-strobe flash of ‘Alpha: Alive’ as he works the original into a mesmerizing and melodic, string inflected monster. Then we have new track ‘Minimal, Minimal’ whose hypnotic refrain could well be a call to arms across the world’s dancefloors this summer whilst Hood also re-works classics like ‘Who Taught You Math?’, ‘Unix’, ‘Minus’ and ‘Side Effect’ into his unique rhythm of vision. Finally Hood wraps the Omega story up with three bonus tracks including brand new track ‘Atomic’.

The exceptional music mechanic Robert Hood is firmly back in business for 2011, kick-starting the new decade with more M-Plant excellence. James Ruskin takes a break from an impressive release offensive on his own Blueprint label to remix ‘Alpha’, the first single that was taken from ‘Omega’, Robert Hood’s concept album of last year. The remix adds a touch of Ruskin magic to this A-side. While maintaining the essence of Hood’s initial track, James provides a fresh outlook that is sure to be as well received as the original. Over on the B-side Hood delivers a brand new track called ‘The Family’. This is classic Robert Hood with its unrelenting rhythm, powerful bassline and a good dose of the funk. While most of us struggle through the cold, this will be firing up dancefloors the world over.