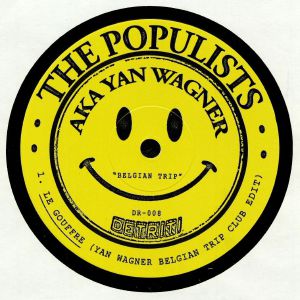 Antoine Harispuru, otherwise known as Golden Bug, has been delivering consistently excellent levels of disco-tinged house and electro over the last eight or so years, and it was only a matter of time before he’s pop up on Ivan Smagghe and Leon Oakey’s eclectic Les Disques De La Mort. The original mix of “Wild Boys” features Yan Wagner drooling over the beats in his familiarly lamenting, 80’s reminiscent style, and there’s a Lord Tusk mix on the back of it; the Londoner adds a subtle EBM flavour to the song, making harder and more penetrating on the dancefloor. “Ik Voel Je” is the weirdo in the crew, a magnificent piece of lo-fi psychedelia that stutters its guitar riffs amid heavy distortions and delays, while “L’Horloge” enters Kraftwerk territories thanks to its broken chops of mechanical voices and robotic beats.