With a long overdue, we finally managed to find the time to compile this list, so with no further comments here is the best electronic music created by Romanian artists in 2021, according to our opinion.

END_OF_DOCUMENT_TOKEN_TO_BE_REPLACED

Inspired from Romanian cultural heritage, be it film, dance or musical instruments, Folclor Abstract is a glance back to the roots in search of a meaningful future. The first track is inspired from the soundtrack composed by Cornelia Tăutu for the Romanian historical adventure film “Buzduganul cu trei peceți” (1977). The film presents a politicized version of the events that led in 1600 to the unification of the three Romanian countries, in the aftermath of a victorious battle against the Ottoman invasion (Călugăreni, 1595). Dance your way through as the story unfolds. Dans cu balans is the result of a personal fascination for the cimbalom, an instrument of high versatility, frequently used in the Romanian fiddle music. In contrast to orchestral performances, which adhere to the composer’s notes to reproduce a work faithfully, fiddling is also open to improvisation and tends to produce rhythms that focus on dancing, with associated quick note changes. Searching for inspiration within Romanian folklore, I found Ivan Braga who was on his own pursuit of cultural heritage, experimenting with a variety of traditional instruments and rhythms from different regions of the country. Doba lu’ Braga is Ivan’s modern take on Romanian drum patterns performed on a traditional Moldavian drum (dobă) with an uplifting twist and arrangement for the dancefloor experience. Reverie is an expression of the creator’s state of mind. Lost in thought, stolen by imagination, haunted by memories, liberated by dreams

END_OF_DOCUMENT_TOKEN_TO_BE_REPLACED

In the beginning of the summer of 2019, AM returns with four exotic edits and reworks to dance to on grass. Solima is a pitched down lush and spatial Afro gem that will cause instant euphoria on any dance floor, followed by a faster and uplifting African jam called Ali Baba. Both have that late 80’s synthetic vibe we dig so much.On the flip there are two tracks which are constructed upon respectively an Egyptian and a Turkish sample. Badaouiah reminds of Carl Craig’s edit of Congo Man, builds up slowly and gets highly hypnotic and deep, while the second track Mustapha rolls out a quirky rhythm pattern with a hysteric Turkish clarinet sample.

END_OF_DOCUMENT_TOKEN_TO_BE_REPLACED 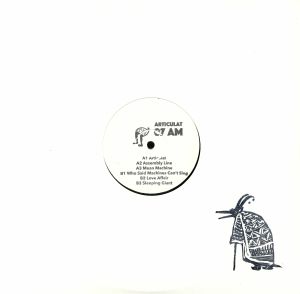 Articulat is the new artist name of Ovidiu Stanciu, a Romanian dj/producer living in Rotterdam. Under the moniker Manikin, he worked on several concept albums with titles like Popular Mechanics, Taxim and Grandma’s Attic Revival over the last couple of years. The A-side includes three thriving and pounding slow-beat bangers, while the B-side shows a Articulat’s more versatile style. Expect experimental electronic songs inspired by themes like Steampunk and Romanian folklore, very precisely engineered to experience storytelling in the most physical way.