This EP features 3 remixes, one By Brian himself and the others by Detroit’s Patrice Scott and Atlanta’s Byron The Aquarius. First up is man of the moment, Byron The Aquarius with his ethereal take on the original. With it’s cosmic sounds weaving in and out, Byron manages to infuse his soulful sound on the track to take it to a otherworldly territory. Brian is up next with his “Chicago Sur Seine Mix”, introducing a steel drum and some beautiful pads that are reminiscent of 808 State’s, Pacific 202. While still keeping with the original’s pace, this remix has more of a down tempo feel, and would fit perfectly in those late night/early morning sets. Finally Patrice Scott delivers a more beat driven Detroit take on the original, with an emphasis on the hi hats and clap that really gives the track that driven feel. While still paying respect to the original, half way through Patrice takes it to another level with his atmospheric keys that round off a great remix EP. 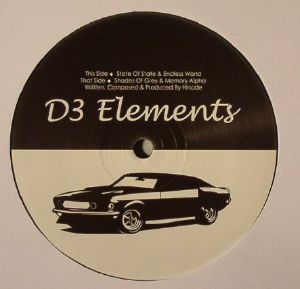 D3 Elements continues its carefully curated run with a new EP from Berlin based Italians, Hinode. Featuring four cuts of tough deep house. Opener ‘State to State’ is a raw, punchy house track with jazzy chords injecting some real soul into the physical beats. Rasping synths and rainy melodies have a hint of the old school about them and ensure that dance floors will be in raptures. ‘Endless World’ is more spacious, with a drunken acid sounding bassline roaming beneath a nicely mechanical groove. It’s one to make you stomp, and so is b-side opener ‘Shades of Grey’ with its bombastic, kicking drums, twinkling melodies and lazy chords. Despite being a sweat inducing house banger, plenty of warmth and musicality remains. Lastly, ‘Memory Alpha’ hurries along with muddled voices, icy hi hats and a flurry of rubbery kicks and squelchy acid stabs. It’s beautifully authentic house music that takes subtle cues from the best of Chicago and Detroit.