Summer 2021 sees the fourth in the Frigio All Stars series hitting all respectable shelves. Jack Carel opens the 12” with the acid burning grunge of “Fuck This Shit” followed by Sons of Traders with the chugging 4/4 nastiness of “A for All.” A trippy, dark industrial streak runs in the snares and swagger of Rambal Cochet’s “Doomsday Scenario Interface” and in the powerful introspection of Daniel Holt’s “The Recluse.” Neud Photo arrives on Frigio with a menacing debut, “The Split” which pierces a haze of smoke in this late-night floor-filler. Honored Matres who appeared on the first volume of these series, returns with the blackest of the compilation. Machine gun percussion close the 12” with Chris Mitchell offering the chopped and gnawed “Alsina”. 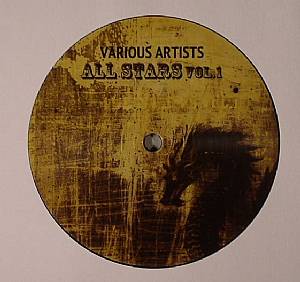 Frigio Records is packing a bag and setting off on a global electronic music trip for this new series ‘All Stars Vol.1’ First stop: Great Britain. Isle of Wight denizen I-Land Beat returns to Frigio following his excellent Cybernautics EP. The South of England artist doesn’t take any prisoners, dishing up a churning pot of atomic House. Stabbing synthlines call up memories of Altern-8 as chords rampage alongside samples and chopped beats for an especially spicy starter. Next, Korea. Pera Yang is a young exciting producer with a raucous message. From his digital album, TCNO1 , ‘Automagical’ is chosen for some special vinyl attention. The track is a raging piece of industrially warped Techno. Pulsating beats jostle against one another before Yang sends all through the shredder. Honored Matres is the blackened acid moniker of Croatian artist Le Chocolat Noir aka Jasmin Yas (the man behind Disco Panonia.) 303 venom drips from beginning to end as claps, cymbals and snares dissect looping vocals for a dark and disturbing floor destroyer. For the finale Frigio returns home, Spain’s Vagon Brei, aka Victor Ramos, delivering ‘80861M.’ The Spaniard is best known for his dreaming Ambient soundscapes on labels like Strange Life and Further Records, but here he is in playful humour. Warbling acid chords thrill, bending under skillfully programmed beat patterns for an intoxicating close.