Palms Trax signals the arrival of his new label CWPT with ‘Petu’, a new single featuring South African vocalist, Nonku Phiri. Originally debuting in dub form during the Berlin-based DJ and producer’s set at The Music Locker as part of Grand Theft Auto Online, ‘Petu’ re-emerges here as a soulful collaboration, neatly complimented by a wide-eyed take from Masalo. Initially written as a slow-heating instrumental to connect the various musical dots across a DJ set, Palms Trax nonetheless had a vocalist in mind throughout, a fresh voice to lend ‘Petu’ universality and energy. Introduced through mutual friend Esa, Johannesburg’s Nonku Phiri draws on her signature style influenced by vintage Afropop styles and folk traditions, delivering a smooth and vulnerable tale of desire.

END_OF_DOCUMENT_TOKEN_TO_BE_REPLACED

The fourth release in Dekmantel Record’s tenth-anniversary, celebratory release series is a collection of new material from some of the label’s favourite artists. A blend of the old and new, brought together through a shared love of electro, and wave influenced grooves by the likes of Palms Trax, The Egyptian lover, Interstellar Funk and Syracuse & Epsilove.

Berlin-based Palms Trax continues adding to his run of quality efforts with the forthcoming release of his High Point On Low Ground EP: impressive effort number two for the Dekmantel imprint. Serving up three retro-futuristic killers, Donaldson parades his ability to touch on the many different corners of contemporary house music, whilst delivering heavyweight dancefloor standards. The title track blazes a beaten-up vocal snippet over stanked-out synths, stretched to a breaking point across a low-riding bass line. A stabbing Moroder-esque bass line dominates ‘Cloud City’, whilst ‘Paws’ equals pure and raw broken-beat bliss with a pinch of acid.

END_OF_DOCUMENT_TOKEN_TO_BE_REPLACED

“I cant even afford bed linen, let alone a 909”. The unpretentious of Jay Donaldson is disarming in many different ways. Words of the label: ”We consider Donaldson aka Palms Trax to be one of the most promising new artists to date. His sound situates him firmly along the Chicago-Detroit axis, cooking up pad-driven jams, off kilter drums and hazy synths that shift like a gentle musical tide. In 2013 he inaugurated the Lobster Theremin label, the London-based imprint that quickly became one of the most talked about record labels around. When not travelling the world for prime-time gigs Donaldson holds a residency at the widely respected Berlin Community Radio. It’s with great pleasure that we welcome golden boy Palms Trax to Dekmantel Records.” 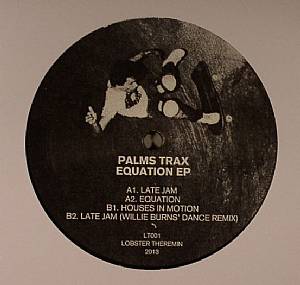