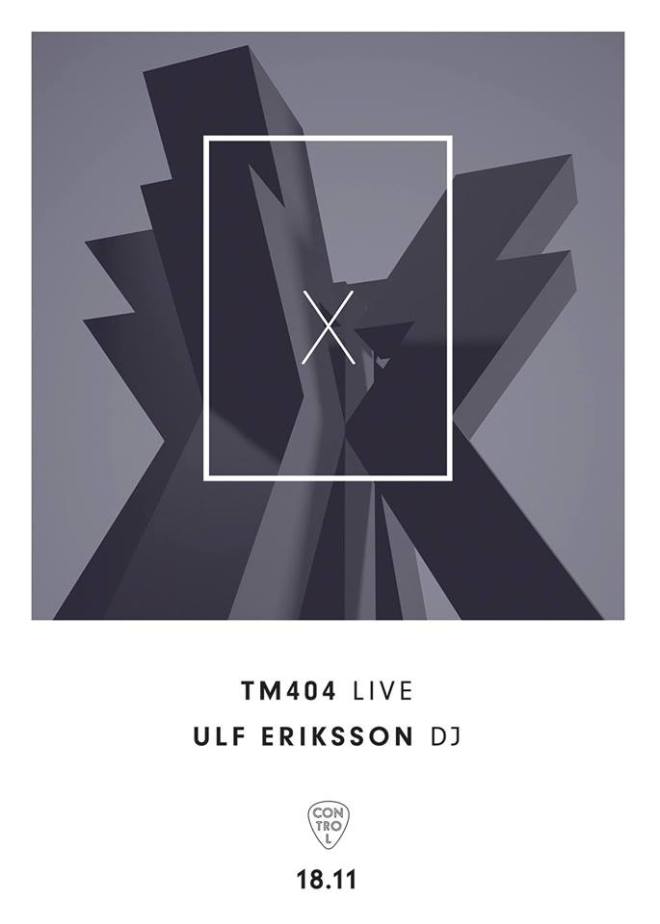 Andreas Tilliander returns to Kontra-Musik in a grand style with his second TM404 album. Titled ‘Acidub’, this highly anticipated release is much more of an evolution than a repetition of the first superbly self-restricted album, where Tilliander even decided to use only one of the two Roland TB-303 waveforms. Acidub is a more playful and open listening experience, no doubt inspired by his extensive live touring with the TM404 concept. In fact, you can almost hear Tilliander’s flock of acid machines breaking free from the restrained modus operandi. Every sound is like a migratory bird with a heart yearning for high altitude and favourable winds. The opening track Alinge paints a lucid picture of these acid birds leaving a cold industrial landscape behind; the flickering black shadows from their wings against the white smoke rising from a forest of chimneys below. The very last seconds of Alinge even echo of the place the silver birds are longing for, but that will remain a secret between Kontra-Musik and the avid listener. Sufficient to say, we can follow these birds of passage as they’re heading south towards a warmer climate, fleeing the cold discipline of the North. Mutron Mantra, for instance, brings us to a rainforest full of serpentine lianas, giant leaves dripping with moist and green pools of water bubbling with organic life. Don’t Defend Mascot guides us through a steaming savannah at dusk with hundreds of yellow eyes following our every step while Pade vividly describes the perils of the flight and the pace and courage needed to press on. In all, Acidub is a surprisingly exuberant follow-up to the more introspective TM404 album. But while the musical journey of this second album is quite different, the experience of sheer aural eminence remains the same. Andreas Tilliander has done it again, and Kontra-Musik couldn’t be prouder.

The Dance is the result of a long lasting musical love affair between Kontra-Musik’s Ulf Eriksson and Sebastian Mullaert (aka Minilogue). As most love affairs, it started off as an exciting experiment: Ulf would play records and Sebastian would bring out his music gear and play a live set. As they were touring with this live concept, their sounds started to really integrate, and after one especially fine night at Trouw, Amsterdam, Ulf and Sebastian decided it was time to conceive The Dance. Once the decision was taken, everything else came naturally. The Dance was to be recorded live, in one take, at Kontra-Musik’s home field Inkonst, Malmo, Sweden.

Mixing opposites is always an interesting project, and that brings us to the present release from Kontra-Musik. On the one hand, we have Swedish National Treasure Andreas Tilliander and his already classic TM404-album. On the other hand we have Svreca, the dark prince of Semantica Records and the heir to Oscar Mulero. We thought it would be most interesting to blend these clearly diverse elements together. We where right. There is a very clear and constant division through the entire release. On one hand you have the warm, fuzzy analogue dubbiness of TM404, on the other hand you have the focused, trimmed and piercing techno from Svreca. Where TM404 brings out beams of acid sunlight from his silver boxes, Svreca conjures up a starless night with his relentless beats. It’s a bit like Saruman was given the permission to remix a Gandalf record. TM404 + Svreca. A piece of modern Alchemy, brought to you by Kontra-Musik.

Mister Andreas Tilliander under his TM404 monniker, the man with more machines than you drops 3 tracks of syncopated science on Skudge.

TM404 is a project where Andreas Tilliander embarks on a conceptual journey through classic Roland machinery. On the A-side of the Svans EP you can clearly hear the connection to Richie and his Plastikman project. The track 303/303/303/606/606 is heavy, slow grooving techno that brings the listener back to the dark emptiness of the Plastikman Consumed era. On the b-side the TM404 project is allowed elevated to new levels. With a Yamaha SY-1 and a Yamaha TG33 entering the machine park, TM404 for the first time, breaks his Roland oath and opens up the project to a future of new possibilities.

Kondens is collaboration between Swedish electronic music veterans Andreas Tilliander aka Mokira and Stefan Thor aka Folie. The sound is a hybrid of techy dubstep with a twist and banging dub-influenced techno. Pure peak time bliss without losing the love for dub and tape delays. This is their ‘Second Coming’ and is supported by a breathtakingly beautiful Substance remix.

“Time Axis Manipulation” is the eight full-length album from Swedish experimental dub/drone act Mokira. You can call this album and the music of Mokira electronic kraut, harsh ambient or the deepest dub. On the album “Time Axis Manipulation” Mokira again focuses on the beauty of sound. Sounds beautiful enough in their own right. Together as songs, Mokira brings rain to your summer.

The second part from the series of Mokira’s experimental dub/drone. Metallic bursts of sound hits like waves on an Irish shore in autumn. Kept together by a solid bassline and a fragile melody ‘Axis Audio’ is an excursion in beautiful sounds. On the b-side, Echospace makes you dance. It is distorted, it is minimal, it is raw and last but last not least, it is oh so funky.

The first in a three-part series of limited 10”s rewiring Swedish experimental dub/drone artist Mokira, aka Andreas Tilliander. ‘Time Track’ is the deepest of dub music and electronic gear has seldom sounded this organic. Rolling cords and bassline builds slowly towards the dub meltdown. On the b-side Silent Servant produces a rolling wall of sound. This is a high energy, metallic sounding dance piece ready to serve djs around the globe. To be played loud, not silent.