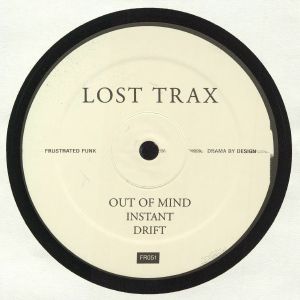 Lost Trax with a new release on Frustrated Funk.

Delsin turns to this classic from 1992 EP by Random XS. Originally released by Saskia Sleger’s legendary Djax-Up Beats-label. This re-release features the original a-side – a hypnotic vocal acid anthem that has become an absolute classic of the genre – remastered and re-cut, meaning that the infamous gap in the original is no longer there. The b-side has two new remixes from Lost Trax and Delta Funktionen resulting in futuristic, electro tinged, twisted versions with crashing hits and famously busy basslines bringing real warehouse energy. 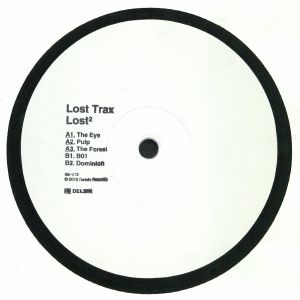 Delsin’s reissue arm once again looks to the revered back catalogue of Lost Trax for a second 12″ that picks out the best of the anonymous collective’s work. The EP features five cuts taken from two highly sought after EPs released on Tabernacle Records in 2011 and 2012. ‘The Eye’ opens things up with punchy drum programming and the sort of sci-fi effects and synths that immediately take you to a future intergalactic world. It’s a weighty but emotional opener, while ‘Pulp’ is more twisted and urgent, with warped synth sounds and busy, bristling drums and perc all building pressure throughout. ‘The Forest’ resets the mood with mystic synths and mysterious atmospheres that mix ambient beauty with suggestive skeletal beats. ‘B01’ then canes through the cosmos on a Detroit electro tip with slithers of synth, swollen pads and crisp hits and ‘Dominion’ rounds things out in hurried fashion. The restless electro drums pound away as prickly snares and cymbals, blurts of machine noise and sweeping pads all wrestle for attention and keep you on your toes. This is high octane electro and techno designed with metallic precision but oozing plenty of human feelings. 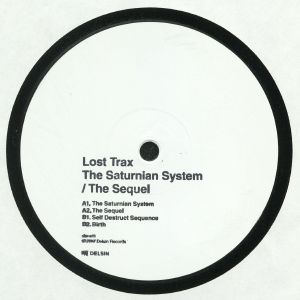 The Delsin re-issue arm turns its attention to Lost Trax. This EP features four cuts taken from two different EPs, The Saturnian System and Lost Trax 2 from 2006 and 2010 respectively. Saturnian System opens the EP with some acid laced electro slickness. Fluttering snares and spacey synths carry it away into the cosmos, then The Sequel gets much busier. Scurrying lines dart about in manic but funky fashion, with serene pads off setting the high energy drums. Self Destruct Sequence then drops into an urgent, slippery electronic groove riddled with squelchy sounds and rubbery bass all perfectly orchestrated. Last of all, Birth is a nimble electronic house cut with plaintive synths and kinetic drums that wiggle and wriggling through the night sky. This is an EP stuffed with timeless sounds and is another essential reissue from Delsin.

END_OF_DOCUMENT_TOKEN_TO_BE_REPLACED

Lost Trax embody the idea of underground techno. The shadowy group, members unknown, began their music careers over 20 years ago. Output may be low, but quality is high; the style being no compromise techno brilliance. And that’s what’s on show here. Kick drums and squirming acid bars are at the core of “Faith”, a track where soaring strings shift and reshape. The chiselled claps and barbed bass of “Flatliner” follows, taking its cue from the heyday of Detroit. A watery world of analogue abstraction greets the listener on the flip, “Lost” being an atmospheric journey into to the squelching swamps of the TB303. Sniping beats introduce the lush tones of “Renderer.” Blurring the lines of electro and techno the track is an elegant end to an EP of deep and dense layers.

The Lost Trax project has allegedly been a platform for any number of artists to produce under the cloak of anonymity, all identity shorn so the focus remains on the music. After a clutch of 12″s for Tabernacle at the turn of the decade, Lost Trax was reactivated last year with a contribution to a Shipwrec 12″ and now migrates to Rotterdam’s finest, Frustrated Funk. On the opening title track, “Life Out Of Balance,” Lost Trax display a nervous fidgety energy and a looseness in execution that will sound quite thrilling on the dancefloor, whilst “It’s You” is a muddy yet heavenly cut. Closer “Out From Under” finds crystalline electro rhythms caked in thick tape hiss too.

Here’s something of a surprise treat for techno fans: a first 12″ in 20 years from legendary Dutch acid techno combo Random XS. The two tracks featured were originally recorded, but never released, in the ’90s, and have been brought back to life by Random XS in collaboration with other producers. “Errant”, which was co-produced by fellow Djax-Up Beats graduate Binaural, is a spacey affair, with undulating acid lines working in tandem with woozy chords, bubbling electronic melodies and clattering analogue percussion. Lost Trax lends a hand on flipside cut “Truant”, which explores deeper techno territory via relentless rhythms, percussive builds, darkly ambient chords and deep space electronics.

The merciless Tabernacle imprint returns with another new artist and another collection of fine, thrilling house-techno hybrids in the label’s trademark style. In all honesty, VC-118A is actually Holland’s Samuel Van Dijk, an artist whose been quietly releasing music under a number of different aliases including Mohlao and Multicast Dynamics. This latest project is a little grittier and more lo-fi than compared to his other ones, where tracks like “Propulse” and “Central Zone” possess a glitchy, minimal tone in a slow-tempo electro coating. On the flipside, “Virile Frame” is a hypnotic and a whole load housier, while Lost Trax remixes “Propulse” into a raging, pseudo-acid monster.

Following on from last year’s Mini LP comes another reflective and resonant record from Lost Trax and The Connection Machine.

One the first Mini LP on Tabernacle Records, the mysterious sounds of Lost Trax and The Connection Machine combine to yield a collection of hypnotic tracks. Touching on inner hopes and fears, their mark is felt long after the music has ended.

SCSI is back with a classy Detroit techno record which has been sat in the vaults for quite some time waiting patiently to be released. As the second part of the Lost Trax series expect deep bass, booming 808 kicks and Carl Craig-esque sounding strings. The Lost Trax series is a project for producers who have inspired the label to record something special and release anonymously as we don’t believe it’s necessary to sell music on the strength of a specific artist’s reputation.