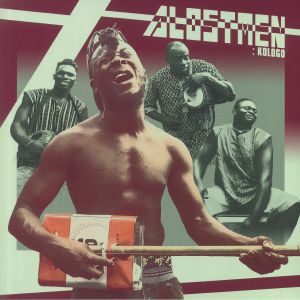 Strut present the brand new album from Alostmen, led by Stevo Atambire, a band at the forefront of kologo music in Ghana. Formed by Stevo and Wanlov The Kubolor (Fok’n Bois) at the suggestion of co-producer Percy Yip Tong, Alostmen’s music is based around the Frafra traditions of the kologo, a stringed lute and uses purely traditional instrumentation in entirely new ways. “I always like to do something “out” withmy instrument, I like to force it to work,” explains Stevo. “I’m a yout’man and into different kinds of music: commercial, rap music, reggae, Malian sounds. I add all of it to the band’s sound in different ways.” Wanlov continues, “The kologo is traditionally played a certain way but Stevo will play it at the shortest end of bridge and accentuate, almost Hendrix-style! He plays with a pedal sometimes and can keep it an octave down with a bass sound. He has evolved the instrument in his own way.”