50Weapons begins its finale with the first of 11 12″s, catalog numbers 40 through 50, featuring a 50Weapons artist on one side and another artist, chosen by the first, on the B-side. “Narr Day” is the first tune ever made by one of Berlin’s key electronic acts; all the flavors of the early days are combined in this minimal ambient techno tune made of the three main ingredients: a bass, a drone, and a kick drum. Cosmin TRG uses the dark drone of “Narr Day” as the base for his modular-synthesizer-enhanced rework of the track. Dark and trippy techno for the head.

‘Obsidian’ marks the third album from Benjamin Damage (his second solo long-player). “Obsidian is a collection of fragmented memories from all the music I’ve ever liked, distorted and restructured into a full length techno record. A purely personal project and an end of an era with 50WEAPONS.”

You have to admire Laurent Garnier’s continued desire to push boundaries and confound critics. His plan to devote 2014 to releasing five EPs on five different labels, whilst mixing up the styles, is undoubtedly bold. This three-tracker for the ever-intriguing 50Weapons imprint is particularly impressive. “MILF” bristles with stuttering analogue rhythms, foreboding chords and attractive bleep melodies, coming on like an unlikely jam session between Sweet Exorcist and Orbital. “DSK” sees the French veteran moving further towards his techno roots, while “He” sounds like an homage to darkwave with techno overtones and more than a hint of stripped-back early Chicago acid.

END_OF_DOCUMENT_TOKEN_TO_BE_REPLACED

The 8th in the remix whitelabel series features remixes by Legowelt and Miles.

A new release by René Pawlowitz, regardless if it is as Head High, Wax, EQD, WK7, The Traveller, Shed or any of his other project names, is always big news. “The Dirt / Fluid 67” is the first new Shed release since his fantastic third album “The Killer” on 50 Weapons released in July 2012. The single unites 2 of the main elements of the Shed sound: dry and puristic functional techno on the A-Side and UK rave euphoria on the B-Side. 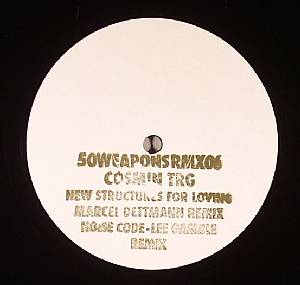 The Romanian hotshot Cosmin TRG gets his work reshaped by two of the best contemporary remixers. Marcel Dettmann is best known for his industrial-tinged techno, but his remix of the title track casts a different light on him. Shards of delicate, metallic percussion provide the basis for Dettmann to deliver fragile melodies and a mysterious electronic groove. It’s an impressive about turn for the German producer, but not quite as jaw-droppingly unusual as Lee Gamble’s version of “Noise Code”. There, razor sharp hats soar in over a pacey, tracky rhythm that stops, starts and collapses to reveal a wobbly, cartoonish bassline. Just before the end, Gamble lets the track descend into abstract mushiness, a fitting end to an idiosyncratic remix package.

Following the success of his recently released album “Heliosphere” Benjamin Damage presents one of the most straight forward techno tunes of the year so far.“Delirium Tremens”, one of the more club focused tracks of the album, gets a remix treatment by Detroit´s techno legend Robert Hood.On the flipside Benjamin reworks his on tune into an extended long version for maximum impact.

Genre bender Phon.o finds new perfection in merging UK bass music with techno, garage and even house music. Not in a wild mash-up kind of way, but very organic and natural sounding. ‘Schn33’ is a guaranteed floor filler for all kinds of dance music Djs. No matter where, no matter when, no matter what mixed with, this is an anthem! Perfectly supplemented with a strong B-Side, this might be the strongest Phon.o single yet.

The new album marks something of a new direction for Cosmin, however – it’s a much more intricate affair that deals in plenty of fuzzy texture, percussive energy and his trademark skimming bottom ends, but looks outside the techno world for its influences. “Gordian is as much a document of my past year as it is the beginning of a conversation. The title references an ancient myth, but describes the very contemporary, impossible task of discerning between real and replicated, authentic and contrived. Coping with facts, objects and bodies, the necessity of ‘making it’, fear of failure, fear of ‘not being happy’ are today’s topics, and Gordian is my attempt at an exploration of those issues.” (Cosmin TRG)

Sonic sci-fi techno album reminiscent not just of early Plaid, Black Dog Productions, Boards of Canada or Luke Slater´s 7th Plain project, but also classic dancefloor classics by the likes of Surgeon, Regis, Dave Clarke or Jeff Mills that knew how to keep a crowd entertained. Bringing to mind the flavor of 1994 without losing the sense that we’re into 2013 as of now. This is dance music with conviction and an album straight and beautiful.

The idea behind the label name is quite simple. After 50 single releases the label will not be continued and instead look back on a series of unique electronic dance music. With catalog number 25 the first half is now completed. As a very special guest Marcel Dettmann returns to 50 Weapons for a celebration of classic techno. Similar to his sold out “Deluge / Duel” single from December 2011, Marcel Dettmann affirms his love of purified, pumping techno.

The Romanian Cosmin TRG returns with this sweet maxi and a slightly new direction. The lush sounds of ‘Vertigo’ sees a tentative swelling melody saunter over brooding beats and claps, whilst ‘Sommer’ tinkers with reduced metallic techno textures.

Shed’s 50Weapons debut. He’s created something completely unique; rather than boom, the rhythm of “The Praetorian” pulsates, taking a metronomic, sand-dry snare and combining it with an undulating pad melody with a distinctly dreamy quality. “RQ-170” meanwhile ticks along with the head-nodding rhythm of dubstep, utilising bass frequencies almost below the range of hearing, while a snarling rasp burrows through the track’s centre.

Marcel Dettman puts out some jacking analogue sounding techno tracks on 50 Weapons. This is a classic 90s techno influenced EP that shows that the purest sounds are at the core of each Dettmann tracks.

Romanian producer Cosmin TRG release his debut artist album, Simulat, on Fifty Weapons. Made up of 12 new tracks, each has been exclusively produced for the album whilst CD-only track ‘Fizic’ is the lead single, as it was already released in June. There are tracks which will work both on and off the dancefloor, but it’s the way they’re threaded together and make for one cohesive and coherent statement overall that stands them apart. Taking appropriate detours into deeper pockets; areas of warm analogue ambiance and abstract alien sounds, there are traces of everything that has gotten Cosmin to this point so far, all re-visioned with an ever shifting focus. Once again confirming Cosmin to be a producer in constant experimental flux, Simulat speaks loudly of an essential talent.

50 Weapons present a new release and this time is Phono with 2 sweet techy tracks.