There is one more 12” release in the Vibes series! The fifth and last EP features 3 tracks by new recording artists from Detroit. First up is Mark King who gives us an emotive, deep vocal work-out that lasts close to nine minutes On the b-side there is Detroiter DJ Raybone, who teams up with TJ as well as Rick Wilhite for two more deep Detroit late night house tracks.

Roundabout Sounds presents the Soul Desire EP from Japanese artist Rondenion. Two tracks to wet your appetite for Rondenions first full length LP to be released this summer on Roundabout Sounds. Remixes on the flipside by Rick (The Godson) Wilhite and Baaz.

This bumper 3×12″ release sees Joe Babylon’s Roundabout Sounds imprint enlisting the help of respected Detroit house artist Rick Wilhite to curate a compilation of unreleased house tracks from like-minded contemporaries under the appropriately titled Connecting The Compass. Highlights out of the 11 track compilation, which includes the likes of Theo Parrish, Baaz and Sean Tate are numerous, but there are several standout moments; Karizma’s “I Think” lays tracky breakbeats over a sonorous synth melody, Marcellus Pittman’s “Wolf & Moonbeams” pairs otherworldly synths and an improvised analogue melody with a low-slung bass led groove, and Norm Talley’s “Track From The East” is a devastingly simple combination of driving claps and pitched organ chords.

Three chairs with a new releases… 4 hot tracks of which the opener Demigods (a1) is a sick acid injected Detroit house cut in a style fusion of Marcellus Pittmann and Theo Parris. 6 mile is another stunner on this Ep wih a nice rolling beat and an upbeat feel.

Roundabout Sounds’ ‘Mellow Drama EP’ features a pair of up & coming duo acts. Suburb from Hamburg and a pair of Greek artists known as Moshi Moshi. The remixers on this project are Tristen and the one and only Rick (TheGodson) Wilhite of 3 Chairs, Detroit. 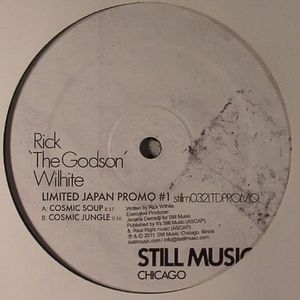 This is the 1st of two limited Japan promos which landed on these shores featuring exclusive tracks not included on his recent ‘Analog Aquarium’ LP. A-side is the raw and ready groove controller ‘Cosmic Soup’, while flipside you’ll find the incredible exclusive ‘Cosmic Jungle’, nearly nine minutes of deep trekking vibes powered by Maurizio-like bassline and wiped with moody strings, all in that shady, inimitable Detroit style.

Still Music is proud to present “Analog Aquarium”, the debut album by legendary Detroit house producer Rick “The Godson” Wilhite. Rick is a longtime member of Detroit’s dance music scene, one of the epicenters of Detroit’s 1980’s techno music explosion. Rick has been around for almost two decades and has churned out a myriad of EPs, but never before did he release an actual full-length album. “Analog Aquarium” will feature a total of 10 tracks, of which most are previously unreleased, including a few collabos with Theo Parrish, Osunlade and Marcellus Pittman.

Rick Wilhite has put together this great comp of unreleased music for Rush Hour featuring the cream of U.S. house producers – here’s Part 1. Rick Wilhite and his Vibes new&rare music record store have been a main source in Detroit for over 17 years.