END_OF_DOCUMENT_TOKEN_TO_BE_REPLACED

Taapion Records is back with a second compilation: four tracks made in the French Capital city with Shlømo, Francois X, PVNV & Birth Of Frequency. 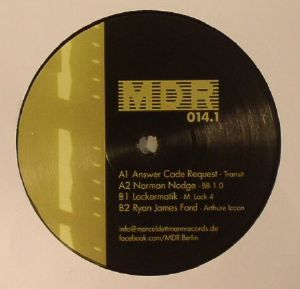 END_OF_DOCUMENT_TOKEN_TO_BE_REPLACED

The long awaited debut EP of Francois X on DEMENT3D. Much like hundreds of techno records that we love, Francois subtly weaves a canvas of very personal links between sound treatments and life events, time decay and society, spatialization and science-fiction, rumble and voodoo tribe rituals, and delivers some very powerful moments of raw and gritty music.

END_OF_DOCUMENT_TOKEN_TO_BE_REPLACED

DEMENT3D Records presents : Polar Inertia Remixed // DM3D005 The story may be quite standard, nevertheless, we feel this record is really special. Last year, in Paris, among all the promoters that made this kind of ”techno riot” happen, there was ”The Only Way Out.”. It’s been found guilty for Silent Servant’s and Abdulla Rashim’s first appearances in the french capital. We’ve had the honour of sharing these line ups with them, finally getting in touch, and starting conversations that ultimately ended up being a record : dedicated to remixing Polar Inertia’s first two ”EP-sodes”. So that’s it, ”Major Axis” has been handled by Silent Servant, ”Black Sun” transfigured by Abdulla Rashim, and our in-house champion Francois X has made a very special treatment to ”The Last Vehicle”. We are positively thrilled about this one.

Francois x returns to the Deeply Rooted House label for his third record. Code Red has a great classic Techno vibe , while Haunted is an acid intriguing deep and dark track. Bonus comes on the flip side with the Marcel Dettmann remix of Code Red. His version is stripped down dark and pumping in his unique and raw and intense Berghain style.

François X returns to Deeply Rooted House  for his second record, On this 12″ everything starts of with “Firewall” an intense track with a steady groove and a nice synth build up, then “Another Riot” is more hypnotic and haunting. “Drummy Zone” is a deep abstract and magical journey to the land of Techno!